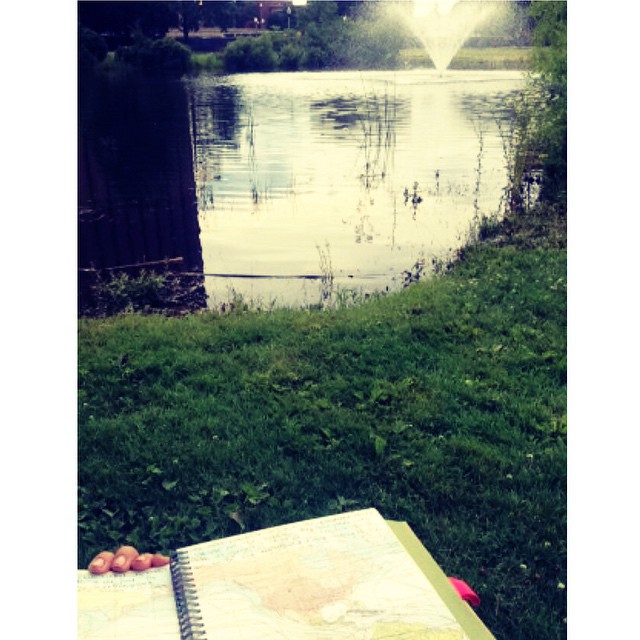 Here’s where I was this time last year. Blissfully writing on the side of a lake in UMass Amherst while the mosquitos absolutely feasted on my legs, roughly 2,500 miles from everyone I know. The story I was working on in this picture would be what I read at open mic that night, which would end up being the beginning of the stories that got me a scholarship to return to UMass this summer, which would end up being the first ever published stories from yours truly (forthcoming!!!). It was a productive week.

And that’s where I should be this time this year. Right now, to be exact.

Instead, I’m on my couch and my 8th consecutive episode of Pretty Little Liars preparing for the new episode. Long story short, I got some kind of virus, passed out from dehydration, busted my head on the shower track, and ended up in the ER. So I’m feeling pretty miserable and useless. I’m trying to reason that the doctors pretty much told me that I only got this sick because I’m working too much and not taking care of myself. Logically, since I already have this week off and am clearly too sick to work, this is a good thing. A force-you-to-calm-tf-down kinda thing. And maybe I was kind of projecting things onto this upcoming trip? Using it as an excuse that once I went back to Juniper I’d be so recharged and ready to write a masterpiece so I can put off trying to write? That’s what I’m thinking. But idk man, I haven’t had coffee in 6 days so I may just be losing my cool.

So yeah, that’s all. Life update over. But my Harry Potter scar from the incident is coming in swell so there’s that.

Best wishes. Warmest regards. ☕️🍷
Love a good costume party and a handsome little man 🕺🏼
“I always notice other people’s punctuation. When someone sends me a message with no exclamation marks or kisses, I respect them. I also think: Are they depressed? Did I do something to offend them?
tb to that one time I did my hair for work. Can you tell I’d been watching Gossip Girl? 😬💁🏼‍♀️
Digging the dancing queen 🕺🏼✨🌈
The Great Gatsby, by F. Scott Fitzgerald (1925) ✨