Indy Blue posted these fire selfies on Insta and then said on her story, “Comment on my pic the most ridiculous reason you’ve ever cried,” and because we will all do literally anything Indy tells us to do, everyone did. Then she shared a bunch of reasons that she’s cried, along with video and picture evidence, and it was just really wholesomely hilarious. I followed along with all of this while I was getting ready for work today and laughed a lot. 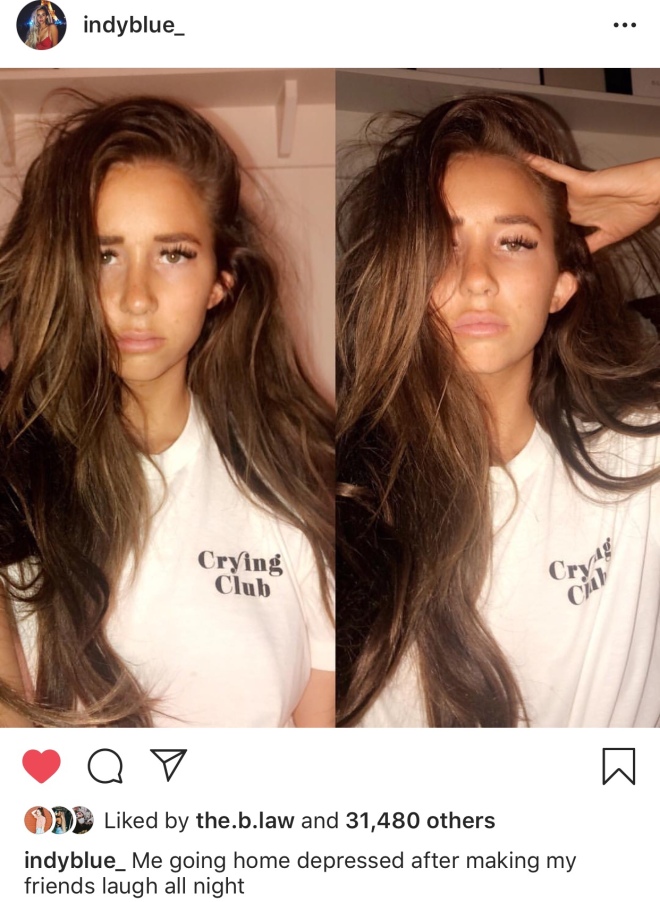 This is particularly good timing for this because last time I was working at the restaurant, people were so awful to me that I actually cried. They were very, very rude. And hangry. And felt entitled to make me feel bad. I’m usually very good at letting that roll off my back, but this was just the last straw. I teared up as I tried to keep pushing through all the things I was doing and everyone saw and helped and I was embarrassed and then another rude table who watched the whole thing happen felt bad and was nice to me and tipped me $50, which is coincidentally the exact cost of my dignity. All was well.

But it got me thinking. I wasn’t embarrassed to have cried in front of my new coworkers. I’m a crier and that’s not a big deal to me. I think you’re weird if you don’t cry, tbh. The thing is that I may have off days, but I’m a good waitress. There is probably nothing that you could say or do to me while I’m in the zone to make me cry sad tears. I don’t pity myself while I work. I don’t have time to. The reason I was embarrassed is because I’m sure it looked like they hurt my feelings, and that couldn’t be farther from the case. See, I cry when I’m MAD. Like when I’m so mad and can’t do anything about it and my body doesn’t know what to do with the rage inside of me. I cry when I’m thinking about what I wish I could say to people, and when I’m frustrated because I know I’m right and can’t make people see it. I know it doesn’t matter who is right. It’s just like an involuntary response of my brain saying sorry, we’re full. It often feels like a betrayal on behalf of my body. It’s hard to look tough when your make-up is running down your face from your tears of liquid rage. I started wondering if other people do this, too.

But I also cry for really irrational and sometimes hilarious reasons. And reading about everyone else’s irrational reasons made me feel so seen. It was hilarious and cathartic and put me in a much better mood as I got ready to go back to work after the last shitstorm.

So I posted the same question on my Insta and then I went to work. And GUYS. These responses are hysterical. They fit their senders’ personalities so well. I feel such solidarity here in the Cry Baby Club. I had to share them with you, in case you needed them.

I’m happy to know that I am not alone. And, of course, here’s some of the ridiculous things I’ve cried about.

So yeah that’s it that’s the whole post. Love you byyyye